For me, these days of sheltering-in-place have been both confusing and clarifying. I know I’m not alone in that feeling, and I also know that many of us have had the good fortune of rediscovering many things about the place we call home. I have found comfort in revisiting well-worn, well-loved design books full of beautiful homes and gardens. And I was curious about what books others return to for comfort and inspiration.

END_OF_DOCUMENT_TOKEN_TO_BE_REPLACED 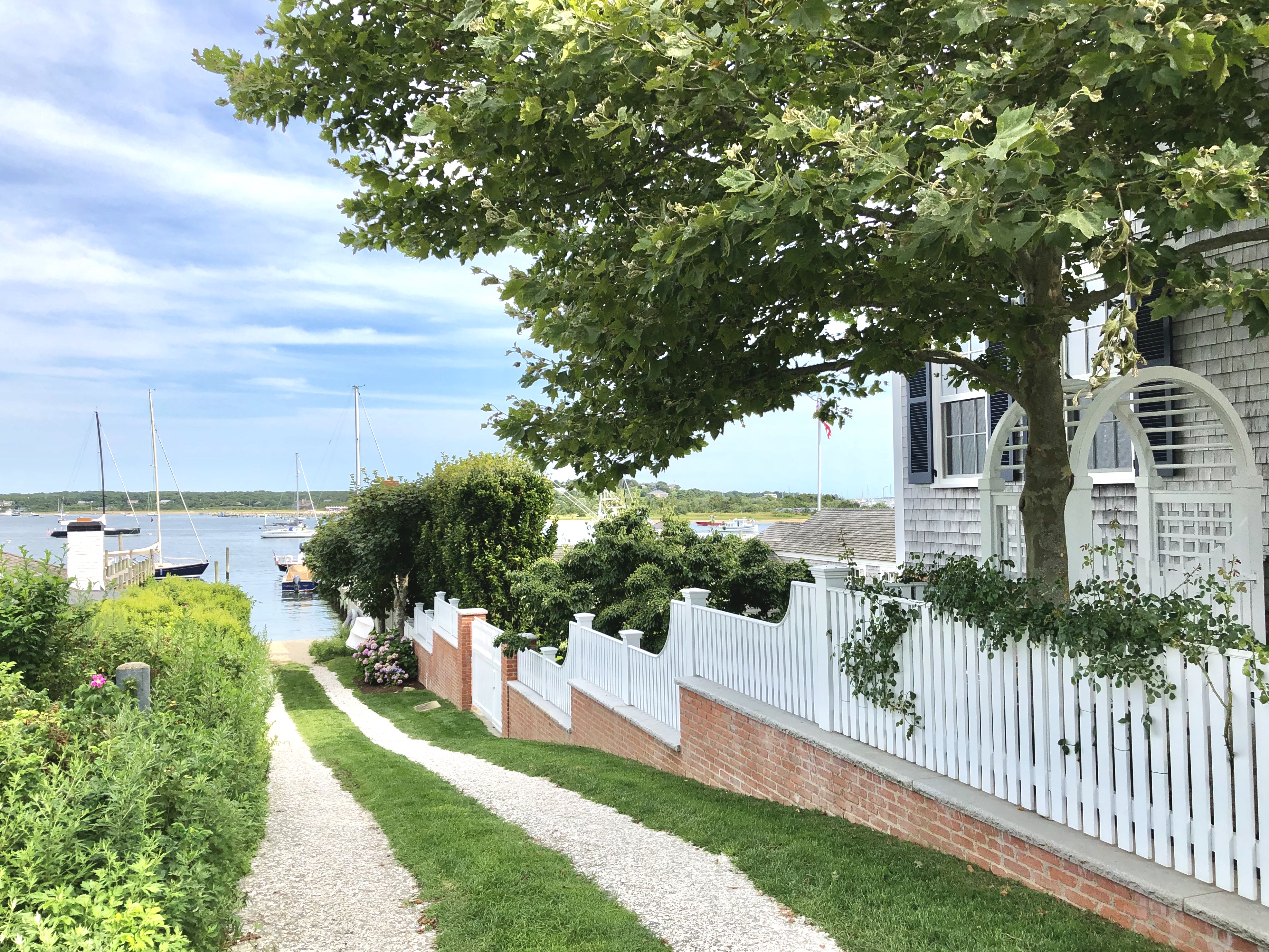 To get to Chappaquiddick you must pass through Edgartown proper. As you follow the signs thru the narrow streets to the Chappy Ferry, you will find yourself in a place of white picket fences, window boxes, neatly trimmed hedges of boxwood and privet, white Federal style houses with dark green doors and shutters, small manicured lawns, and garden paths leading to casual flower beds and to the water’s edge. It is an old whaling town that has had a great impact on my own style and my thinking about home and garden over the years. I love how the front of the houses are formal and the backs are less so. I love the respect for history in the architecture, whether it is renovations or new homes being built. There is the smell of sea air and roses on summer days mingled with the clinking of glasses raised for a toast and the laughter of children and ringing of church bells (not just on Sundays). There are the water views and sailboats and the lighthouse. Edgartown is well-worn but tidy, and I like that. 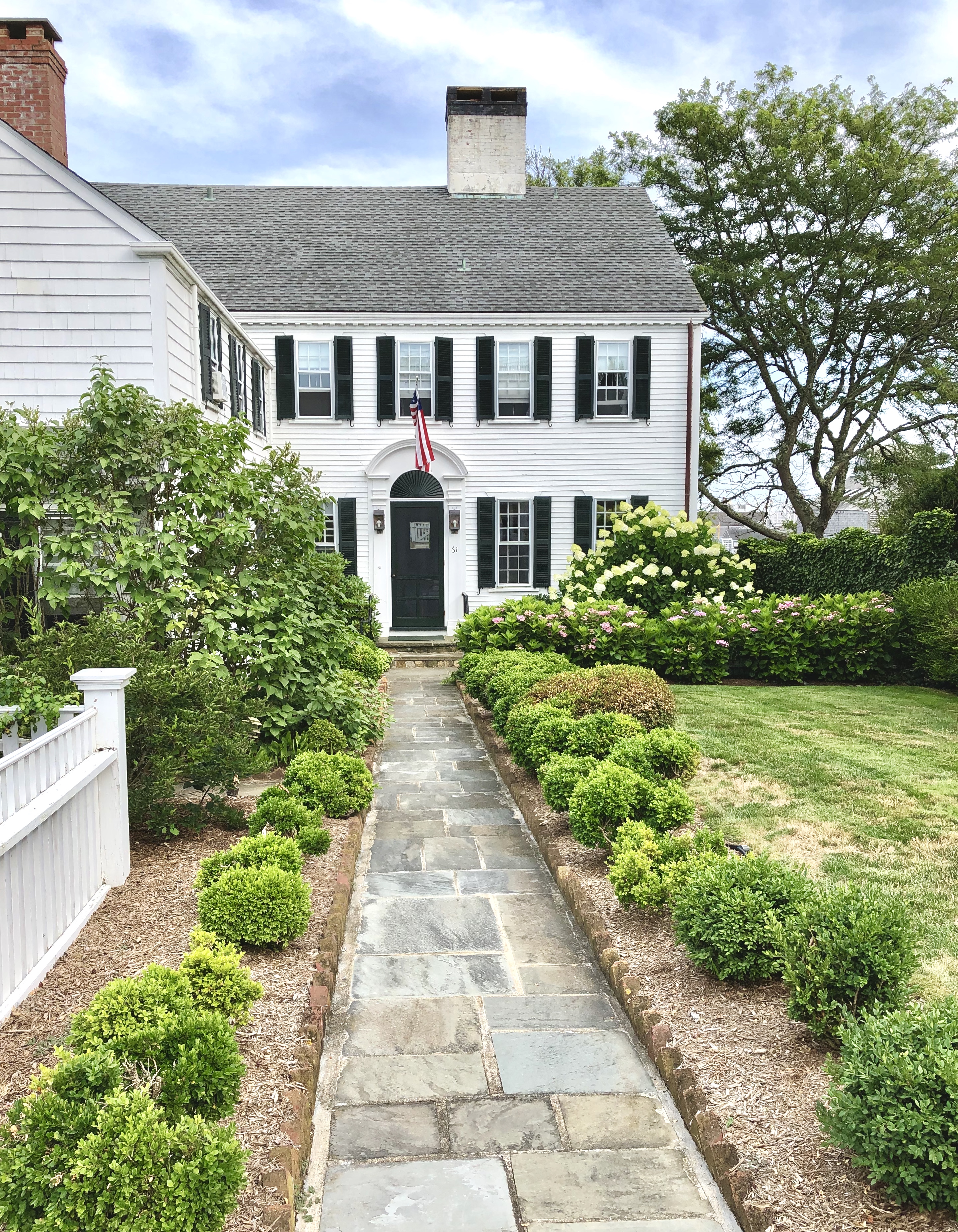 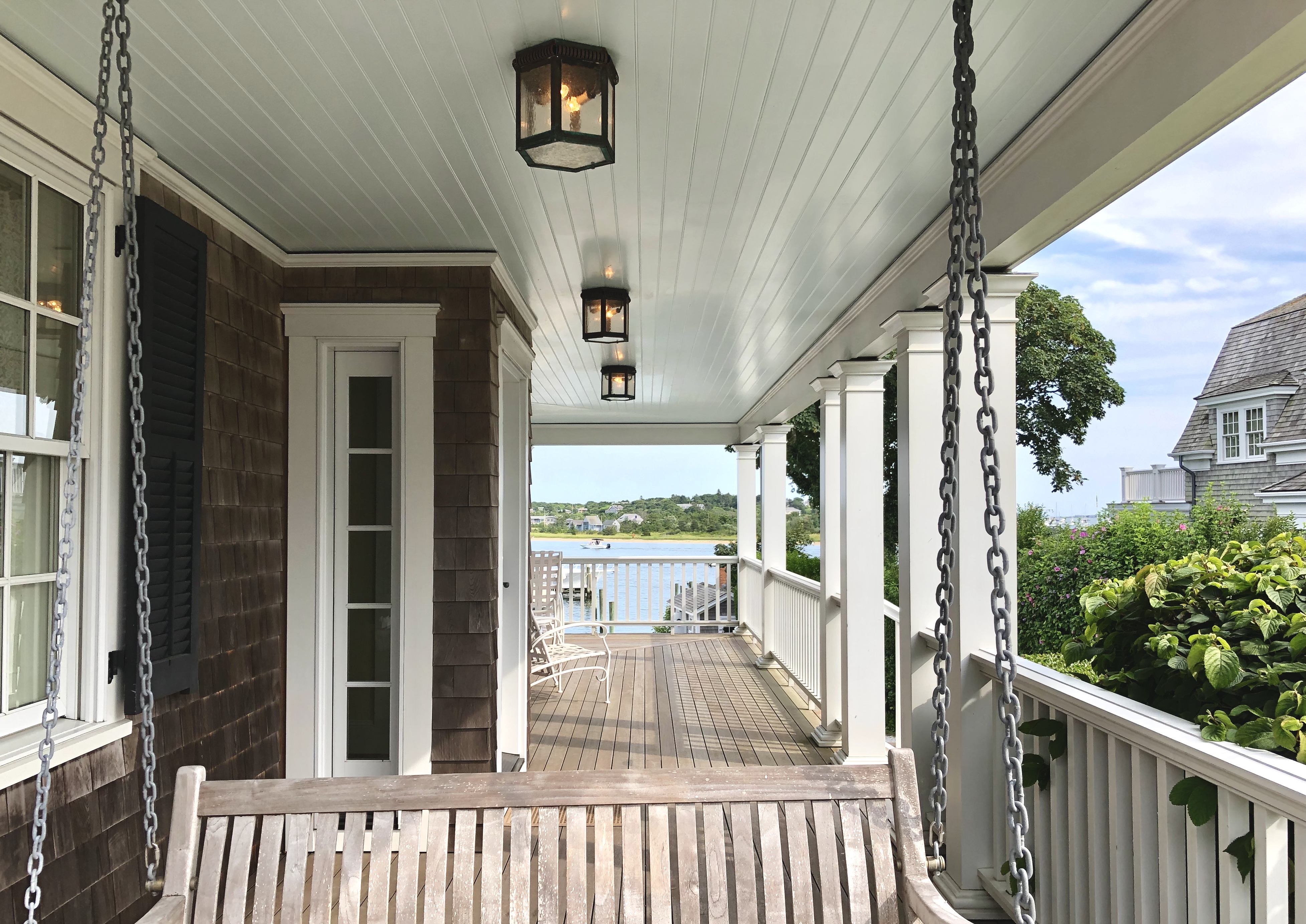 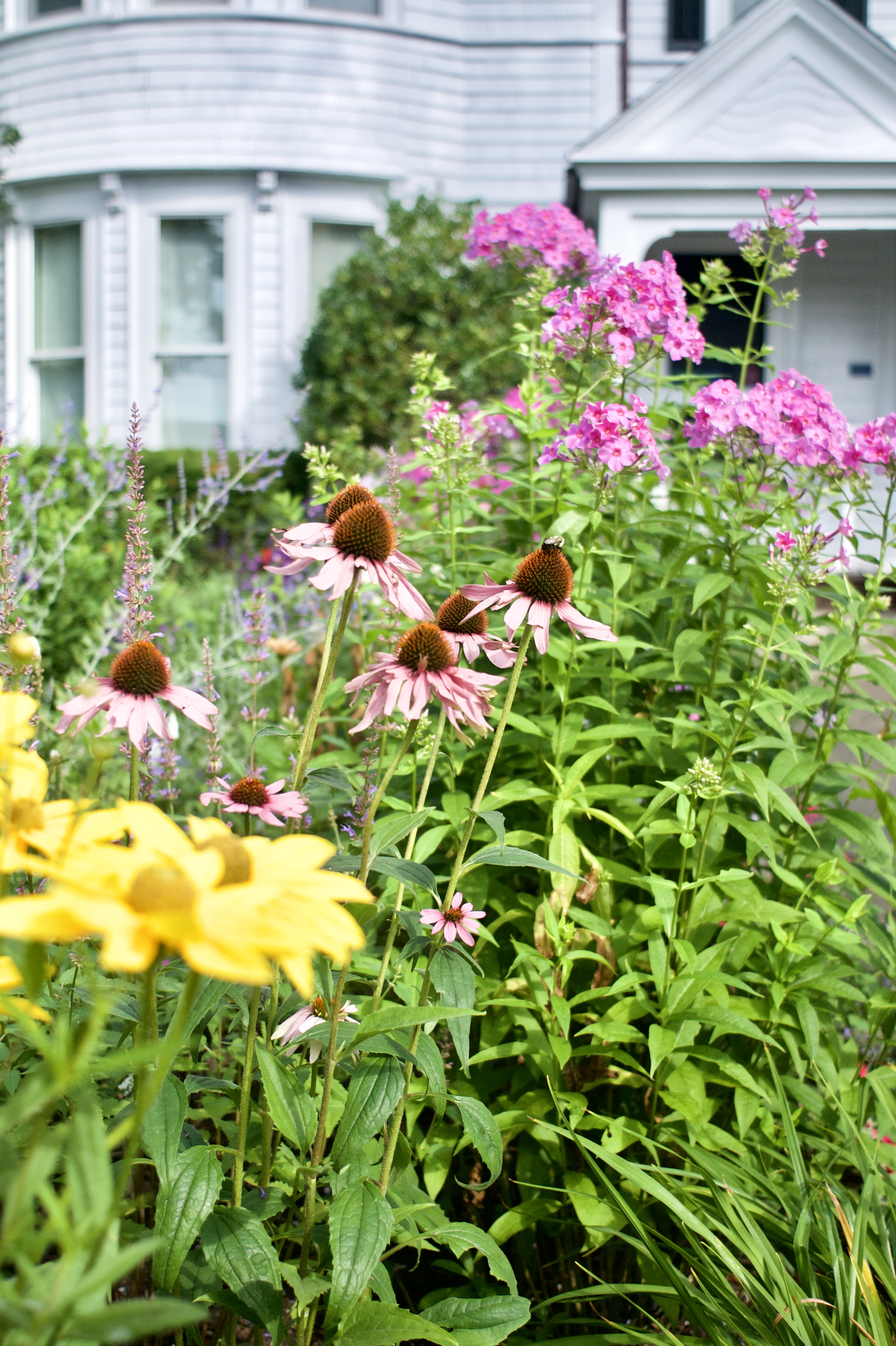 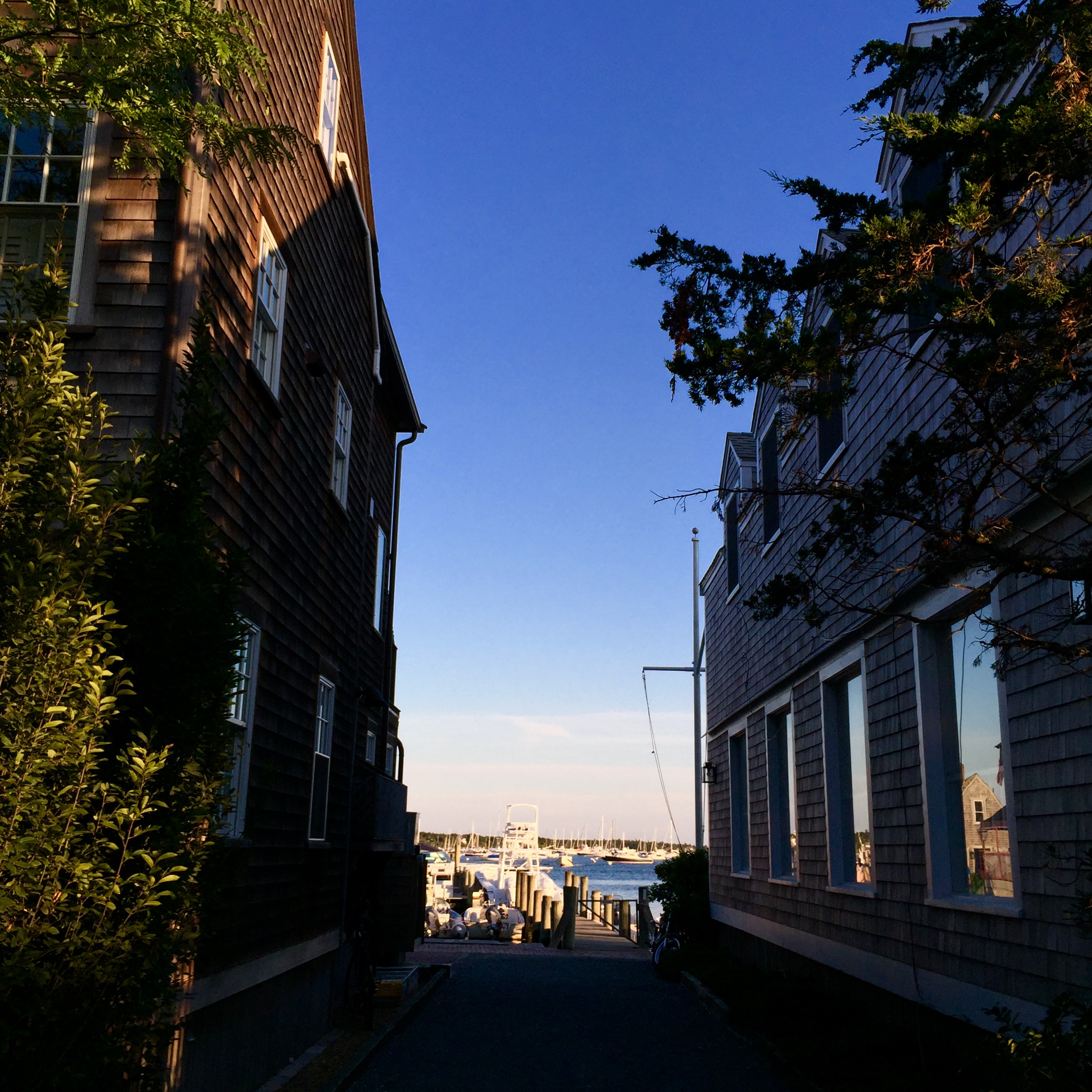 The Chappy Ferry (actually there are two boats most of the time) holds three cars or two trucks and takes less than five minutes to cross. There is no town proper on Chappaquiddick. No cobblestone streets. Just sandy dirt roads. There are no shops or restaurants. There is one small store: The Chappy Store (recently purchased and revamped from its original very rustic, shall I say a bit run down condition). And the houses are not the thing on Chappy; they are hidden away for the most part, off the beaten path among the trees. The locals (there are some) will tell you about the unusual life on Chappy, like how the school children on the school bus cross over on the ferry every morning (and all you can picture are the children and the yellow bus on the rough water under gray, foggy skies with seagulls calling). You go to Chappaquiddick for the quietness and the beauty of nature that is left alone out there on the beaches and the trails. You go for the farm grown vegetables and flowers (amazing dahlias, sunflowers, lilies, and so on…), four-wheeling and kayaking, the calm, still nights and stargazing. It’s a place set apart from the rest of Martha’s Vineyard—rough around the edges and no-nonsense. 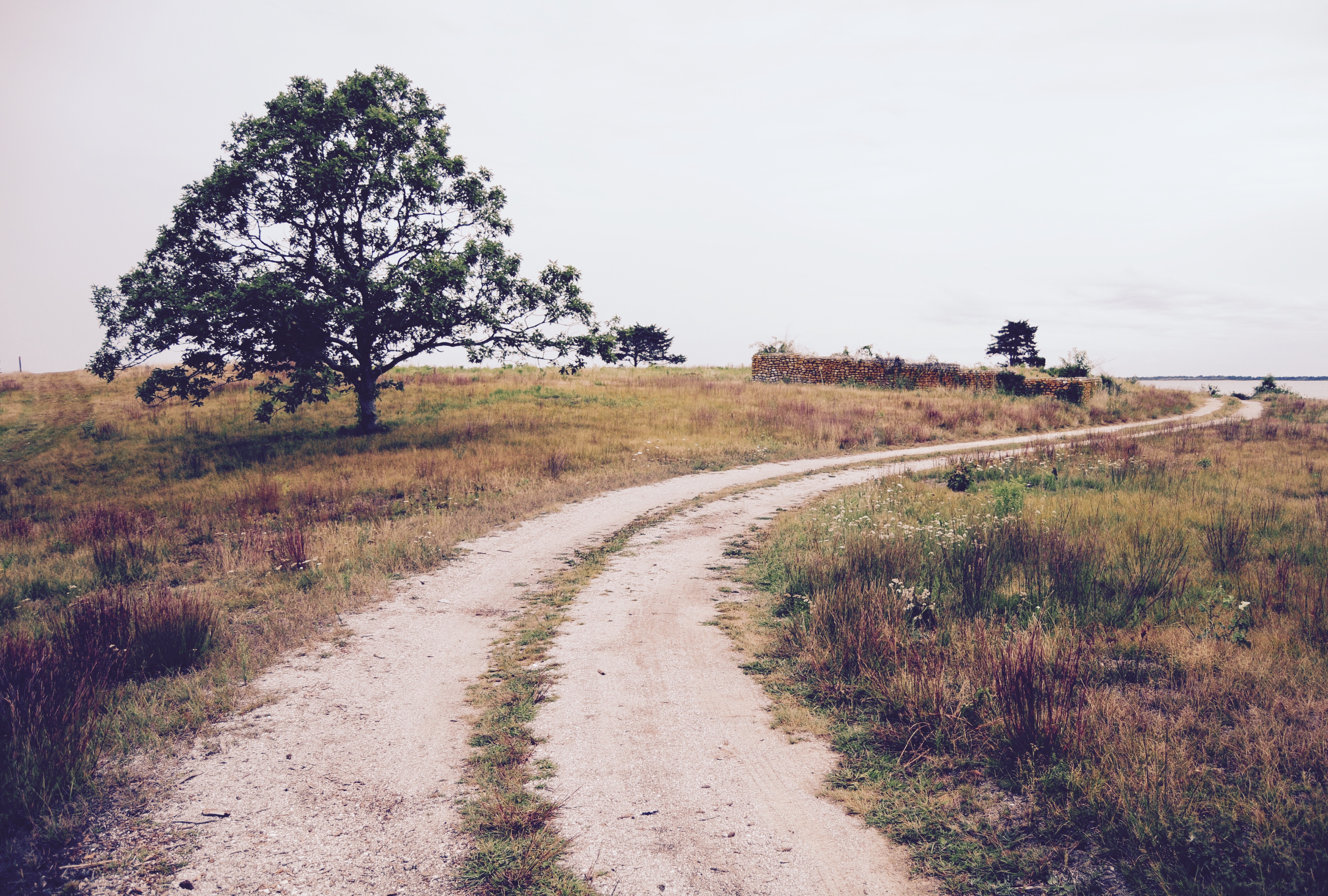 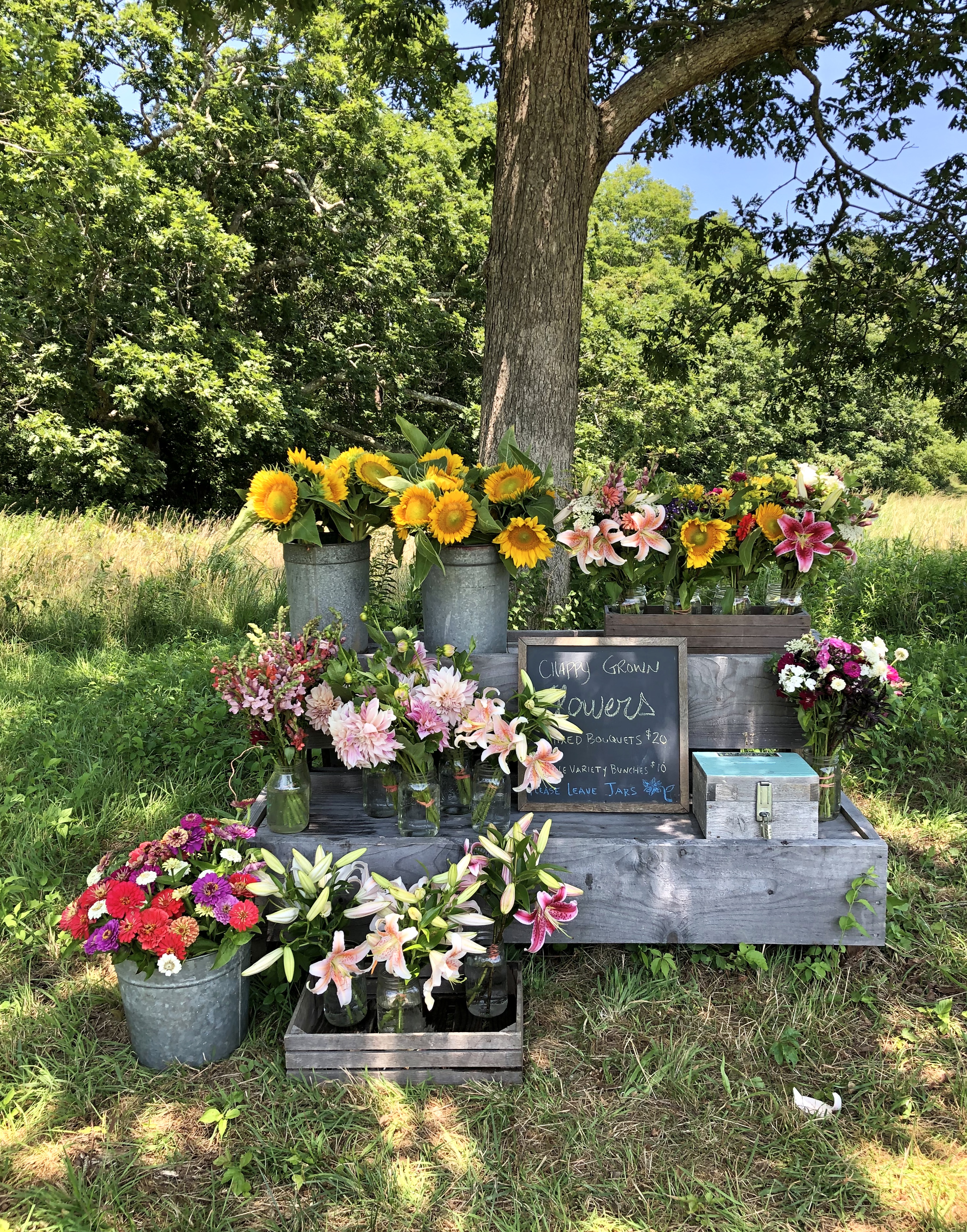 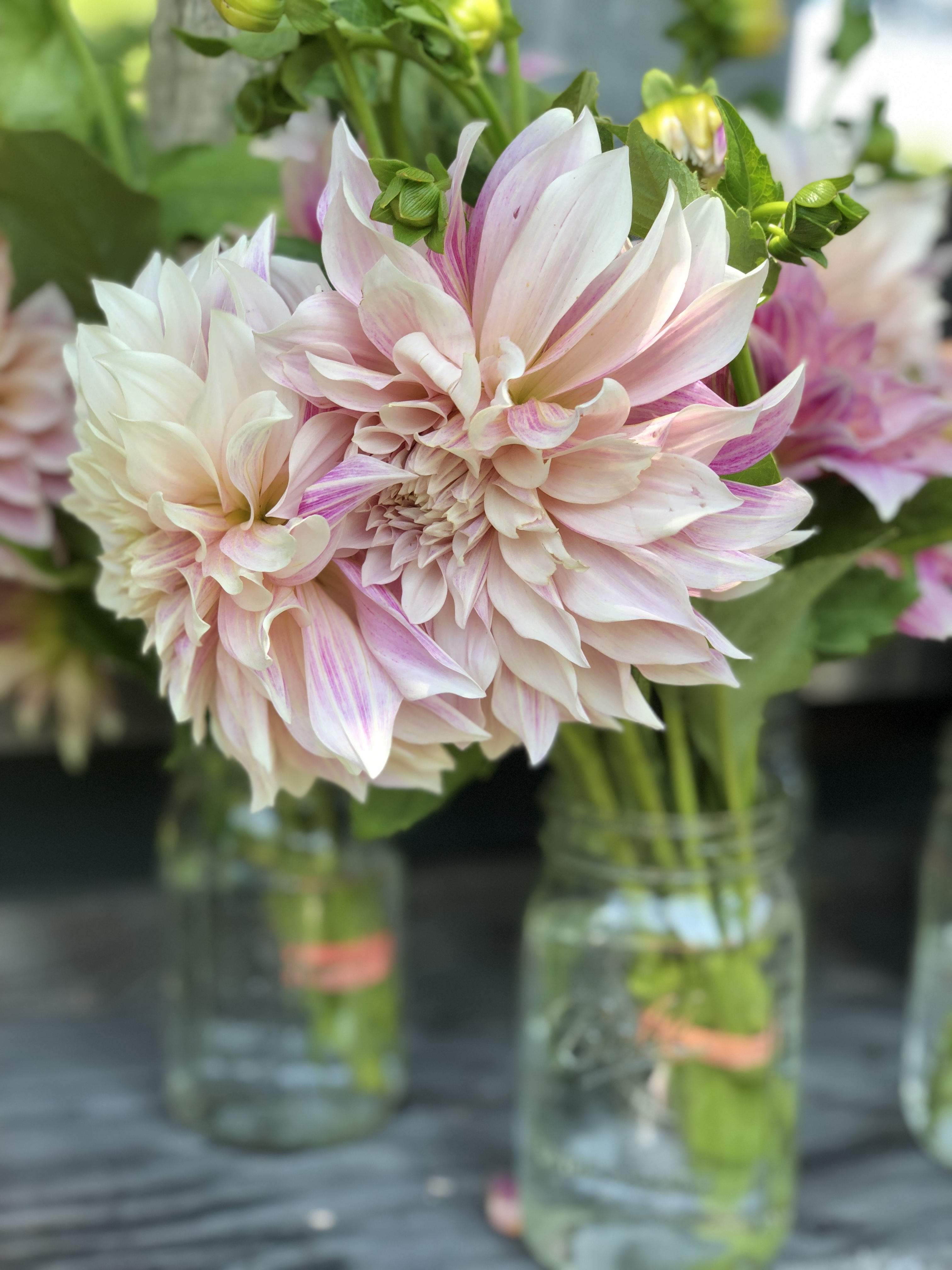 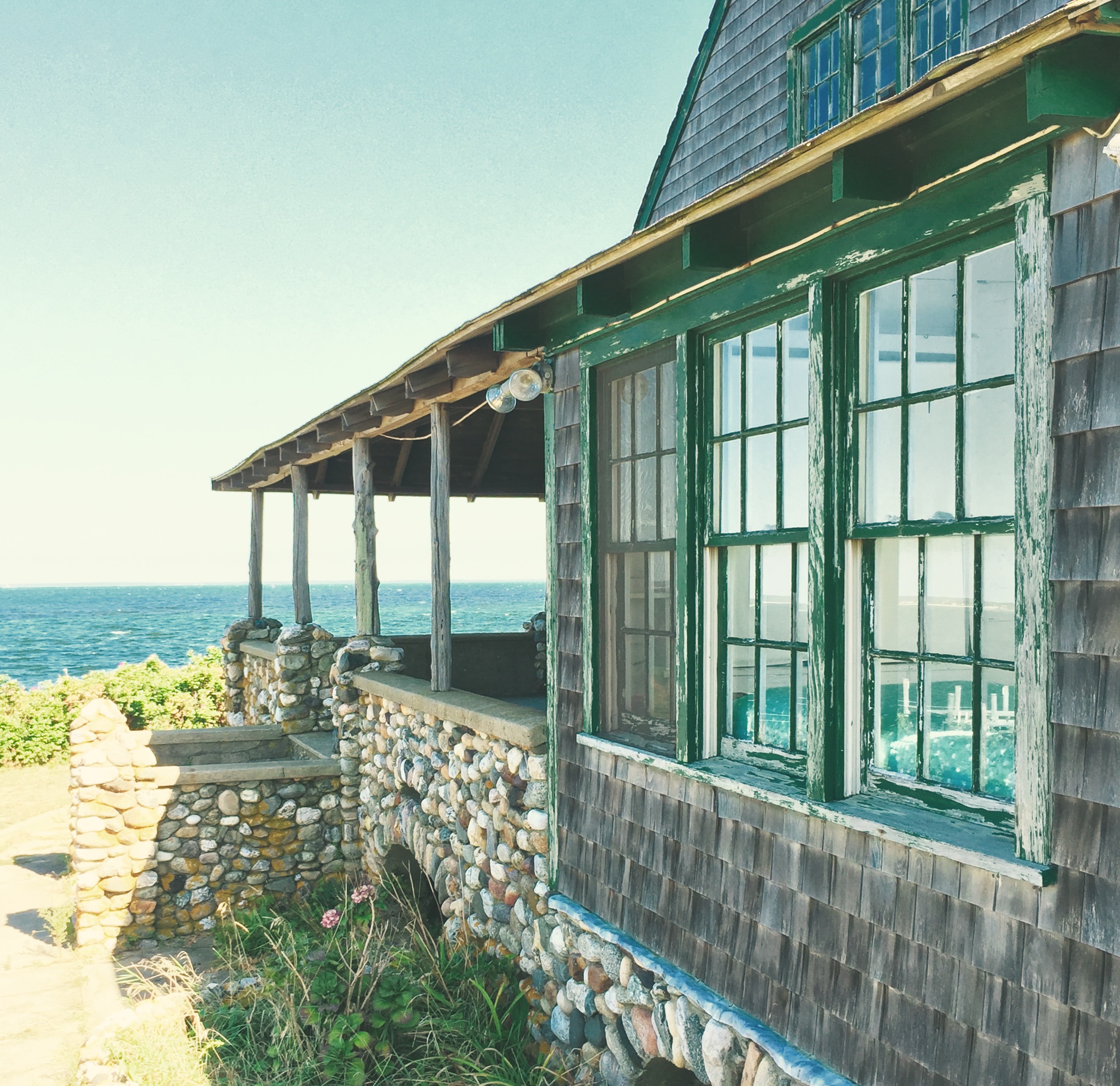 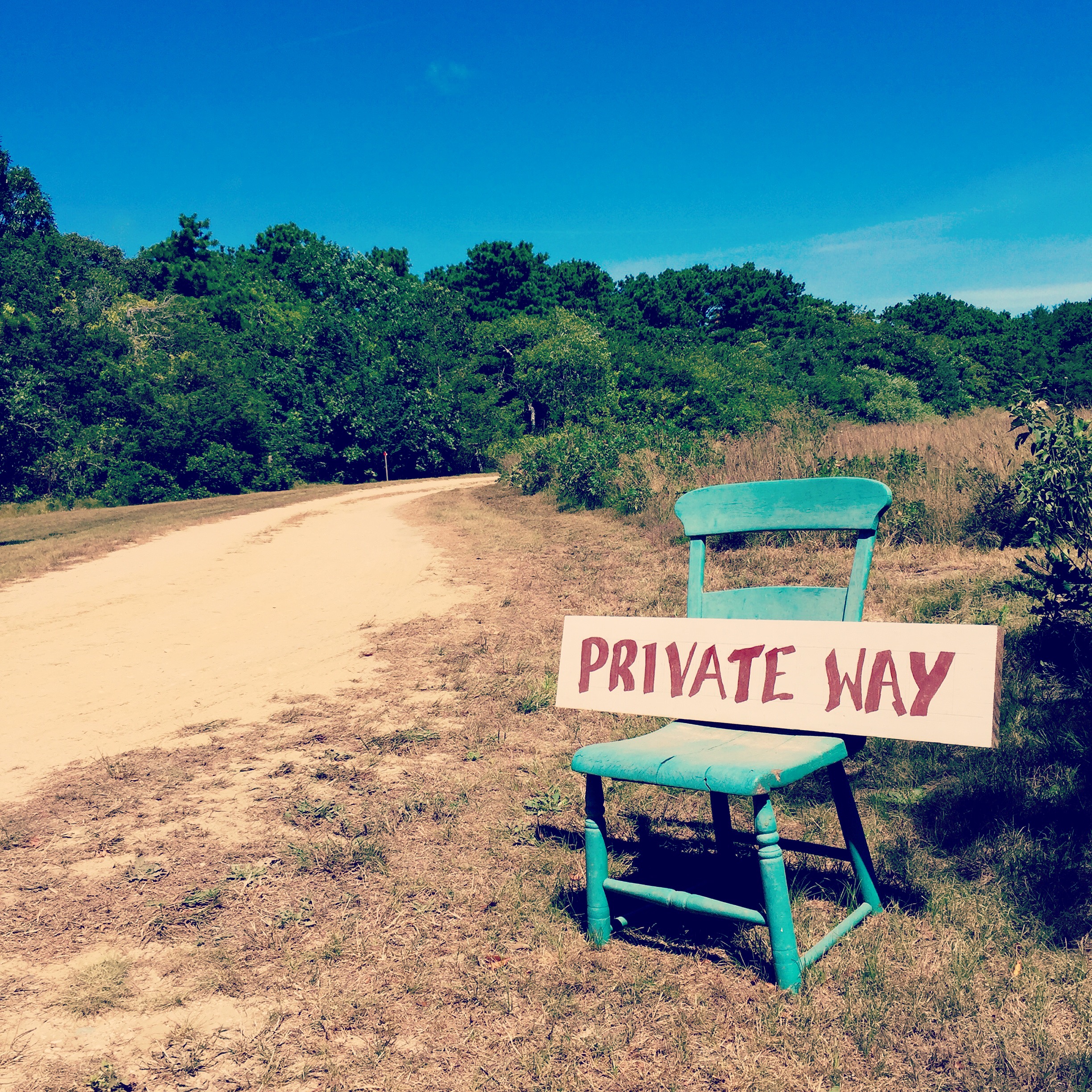 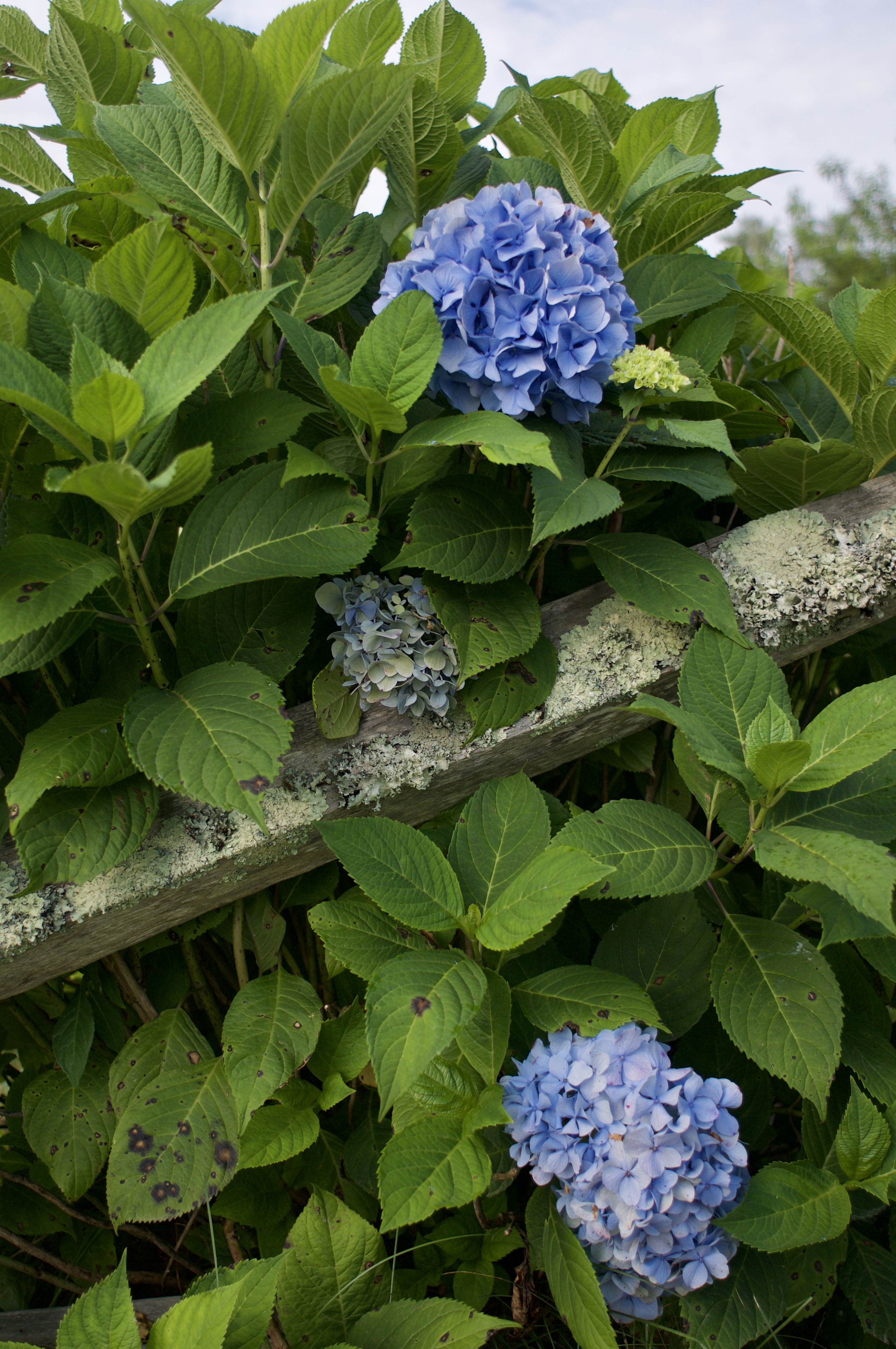 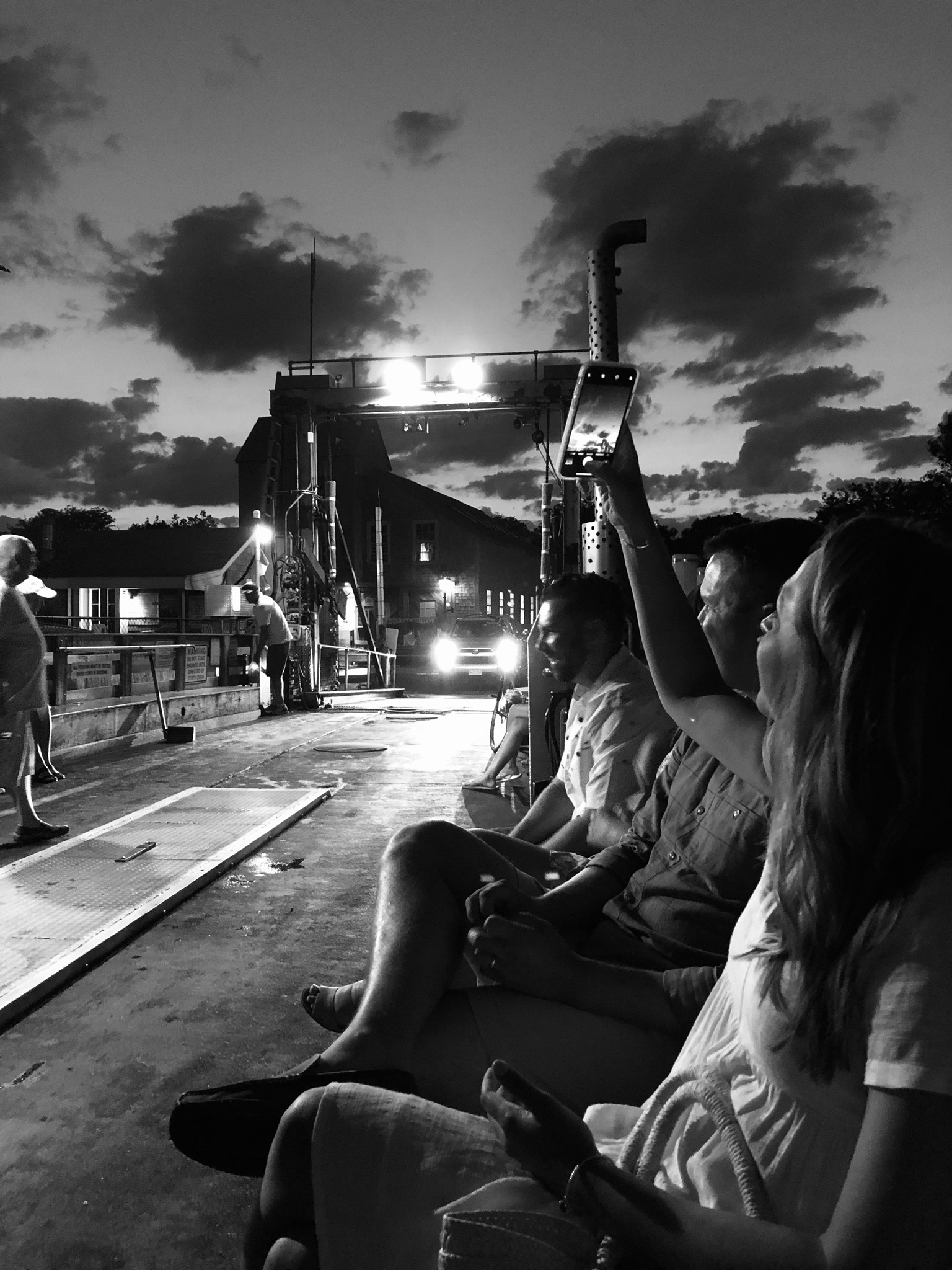 If Edgartown is like a Keats poem, romantic and flowery, Chappaquiddick makes me think of Emily Dickinson’s work, small but full of beauty, mystery, and awe.

So—this is where I have been lately.  I hope you all have been well.

(*All photographs by Michael Sneeringer, Jr.)

It’s the middle of the long Memorial Day weekend that kicks off the unofficial start to summer, and after a cookout, sitting on the screen porch we slip naturally into one of our favorite debates: beach house or lake house? It’s gotten me thinking about a classic lake house that I revisit often in A Place to Call Home: Tradition, Style, and Memory in the New American House by Gil Schafer III. (so you might have guessed which side of the debate I am on). 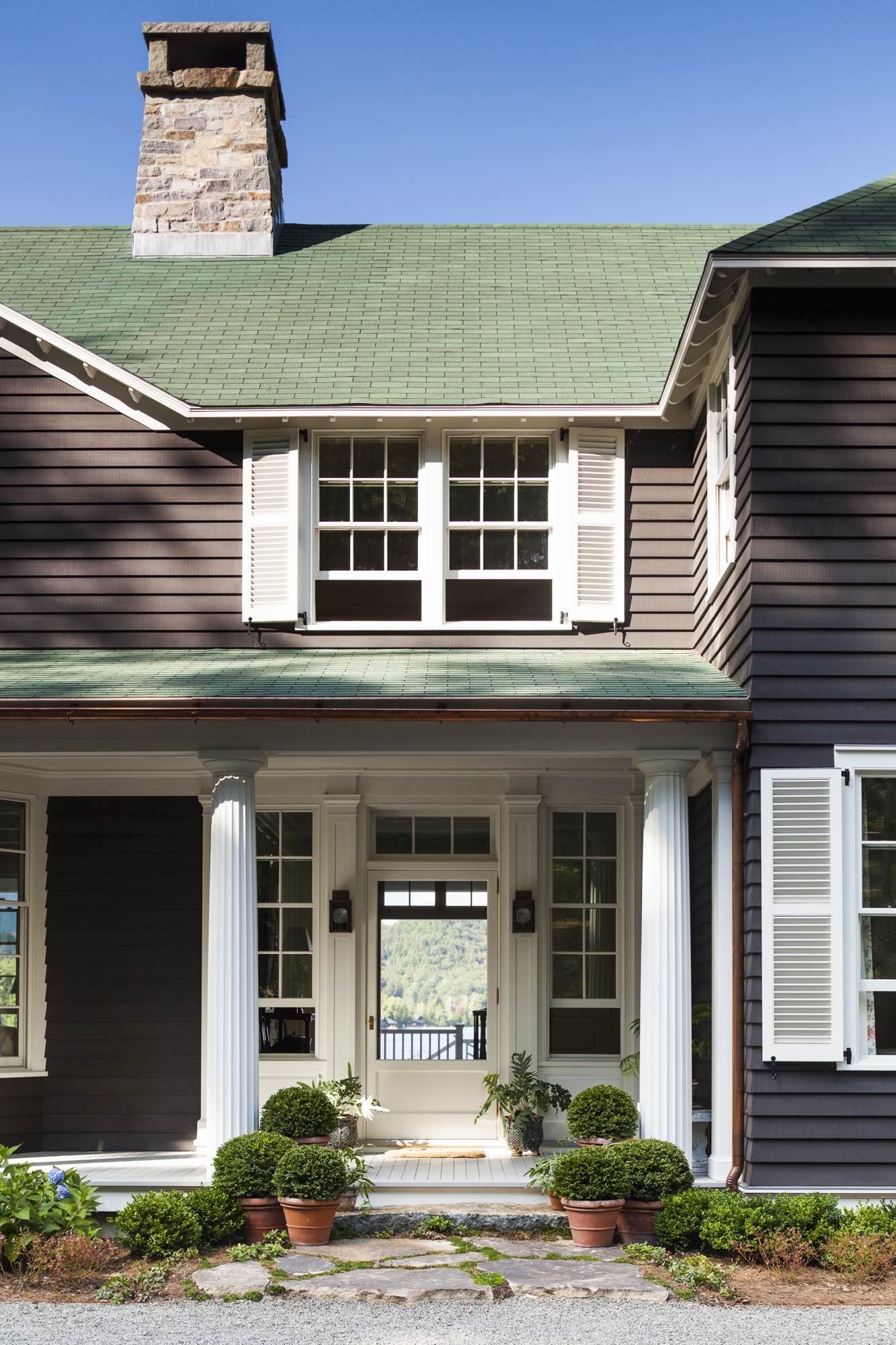 The home is designed and decorated by Schafer and situated in Lake Placid, New York. It is a stunning blend of casual Adirondack camp aesthetic and formal elegance. The brown shingle siding, bright white trim, and green roof work together harmoniously to create what Schafer calls “a balance between Colonial Revival and Arts and Crafts” styles, and this balancing act happens almost effortlessly elsewhere: the formal columns along the more relaxed open porches, potted boxwoods alongside breezy hydrangea, and so on. 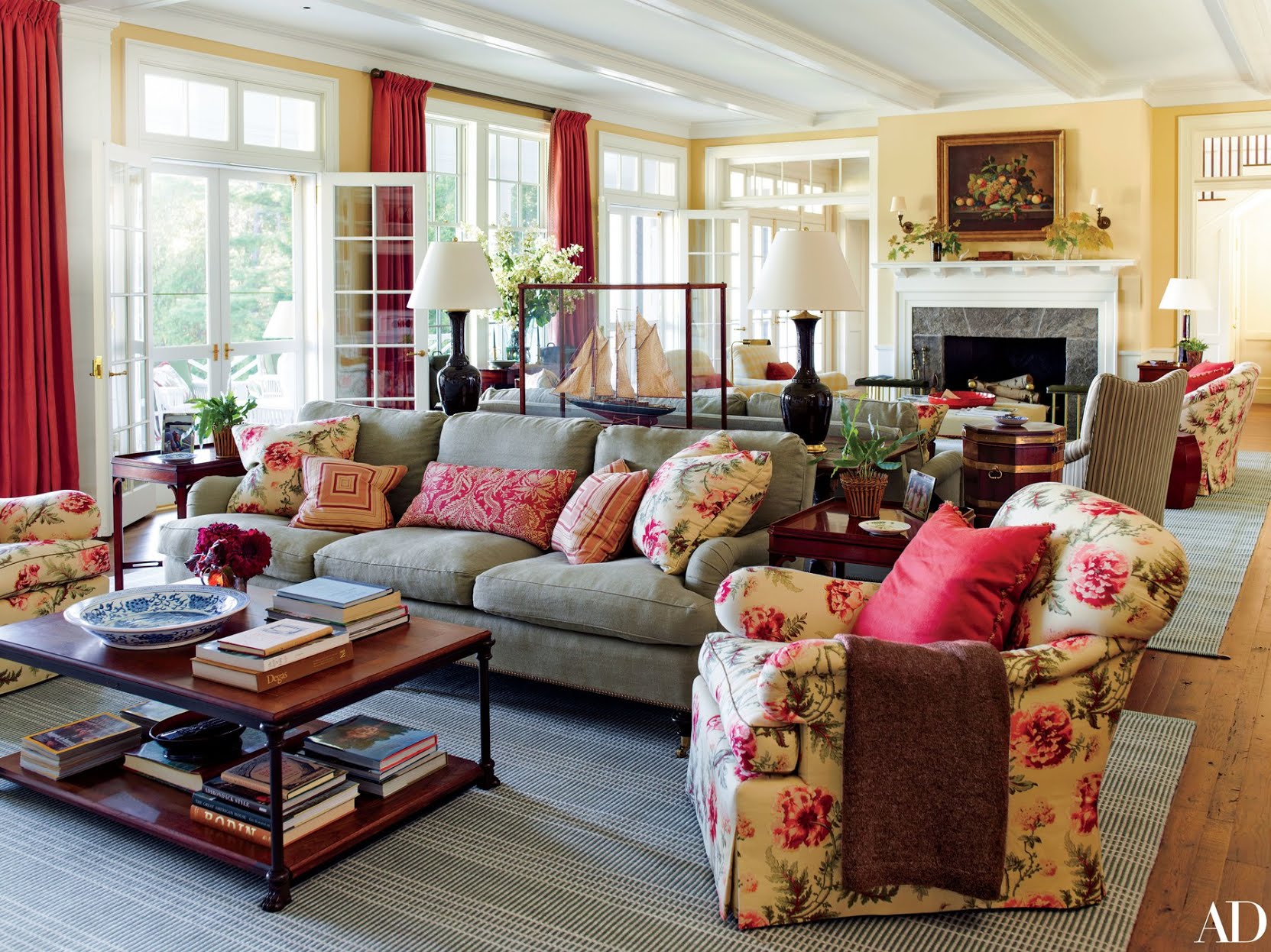 Inside, French doors, transom lights, and wide doorways allow natural light and lake views to become an integral (and I suspect, magical) part of the whole house experience. 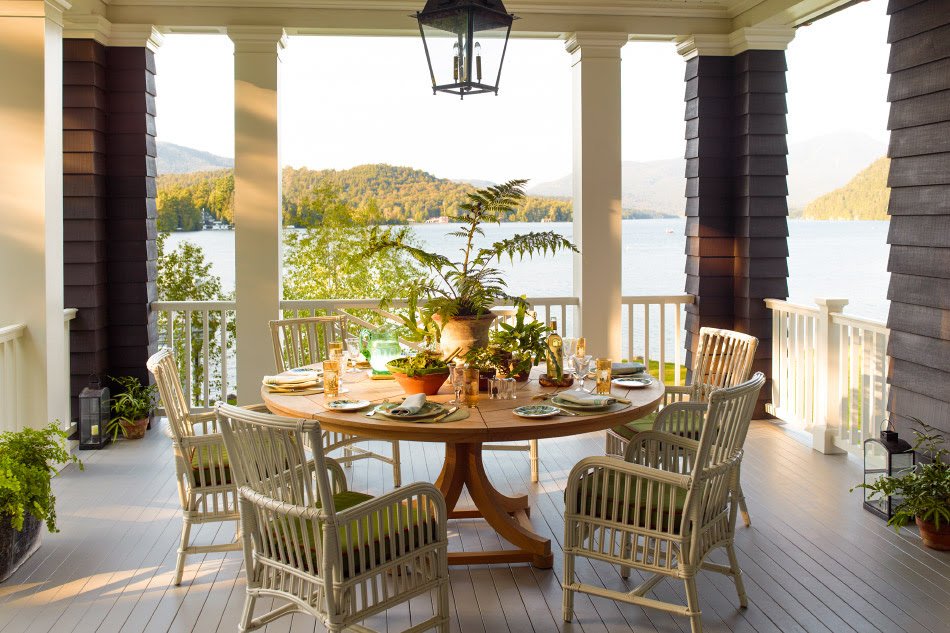 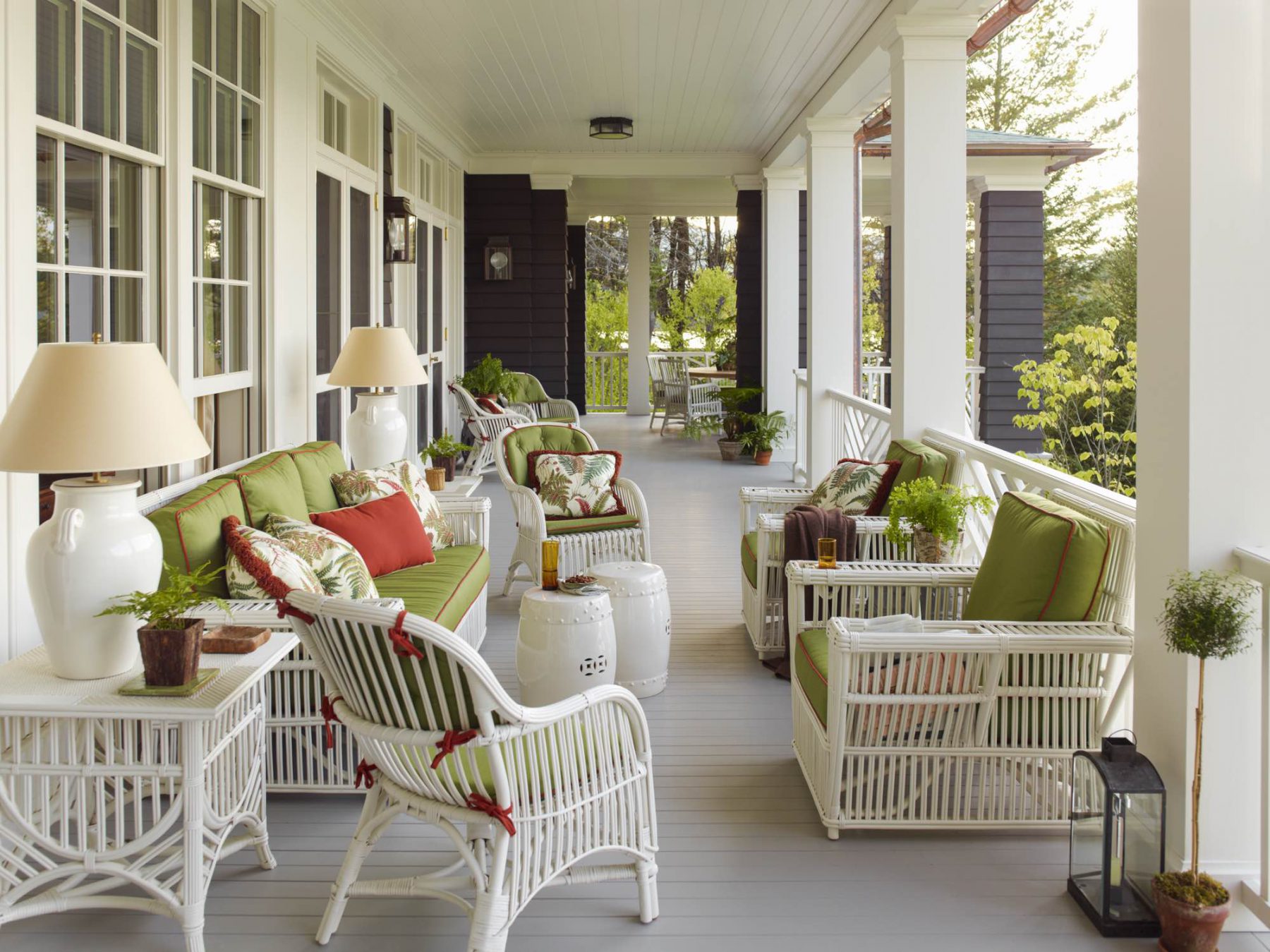 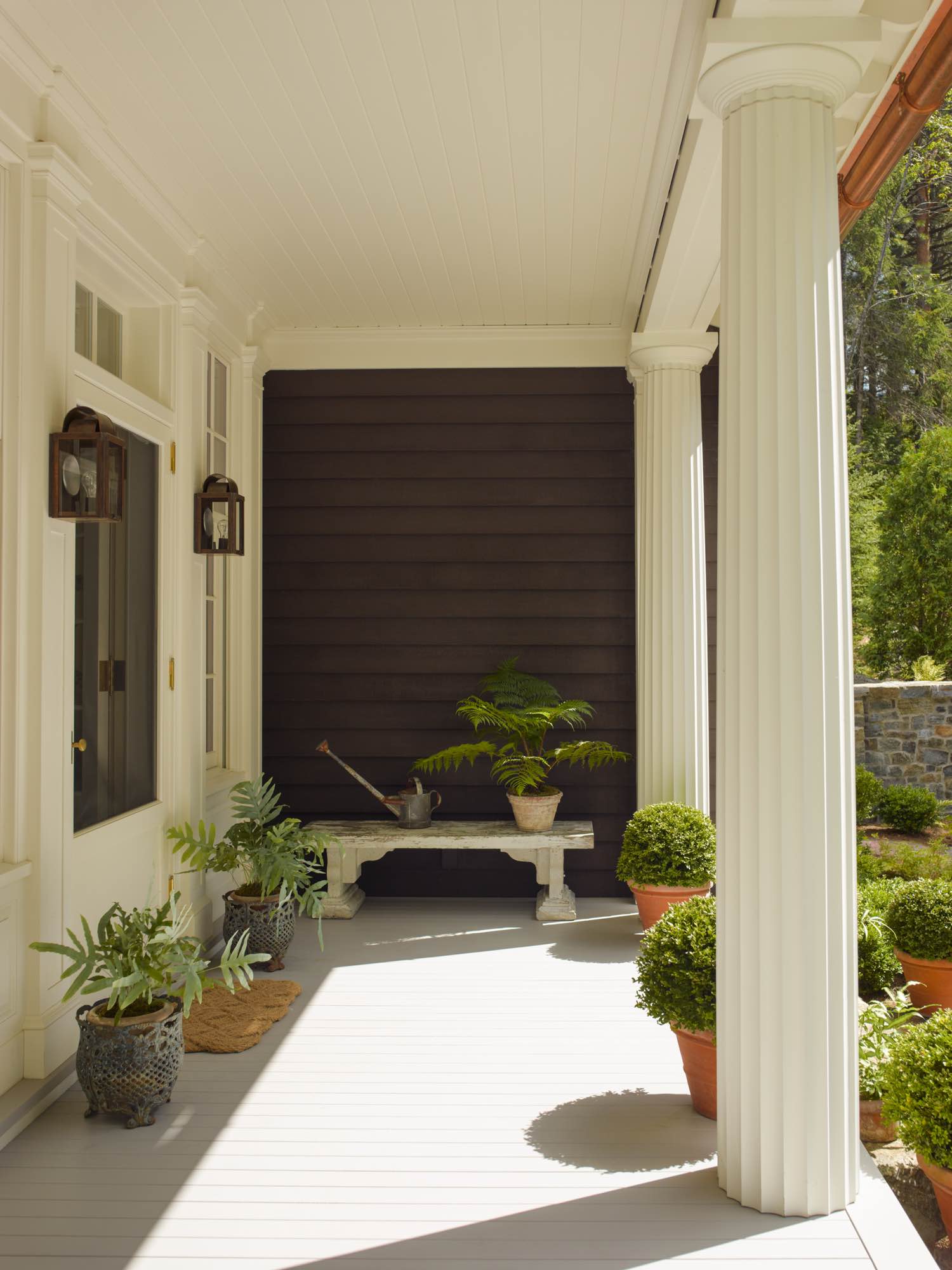 And when it comes to the debate—beach house or lake house? Well, I say lake and he says beach. So for now, this revisiting (and moment of reverie) is just what I need! 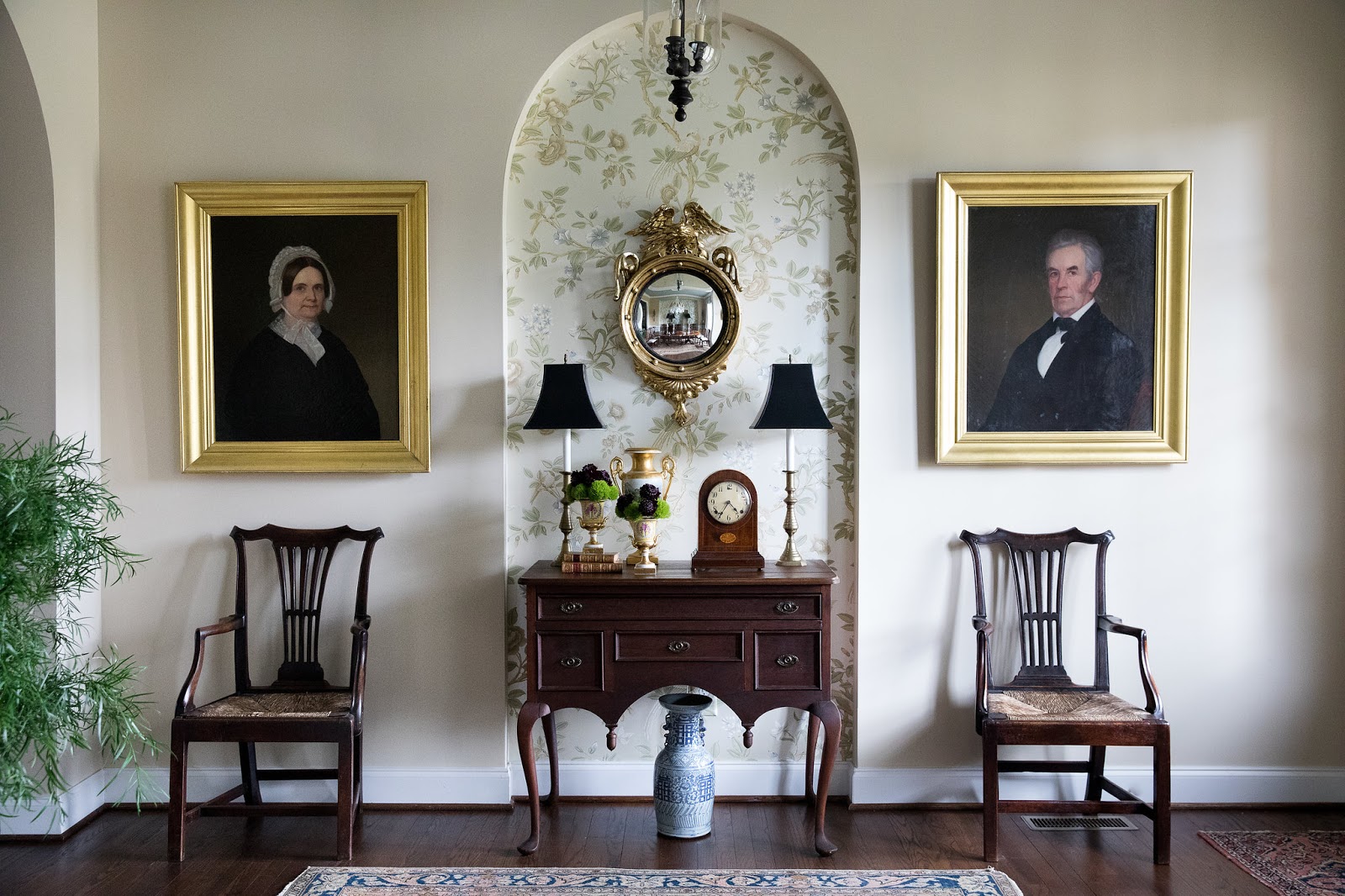 Interior designer Eric Ross grew up in a small town in Kentucky where her spent a lot of his time riding his bike around and looking at houses and imagining their interiors (he especially liked riding at twilight when he could catch glimpses of the inside). Even at a very young age, he noticed things. He paid attention to details. He thought about how to set tables and arrange furniture in rooms. He wondered about chandeliers and the size of a foyer. He began to give decorating advice about things like candles and colors, things that most young boys don’t care about at all. It seems he was honing his craft and developing his sense of style.

In his recently published book Enduring Southern Homes, Ross explains his professional approach to creating the style that he grew to love, one that he describes as traditional and timeless, rooms with a sense of permanence: “I want them to ground you.” His book features thirteen homes he has decorated, including his own in Nashville, and includes note worthy tips at the end of each section. 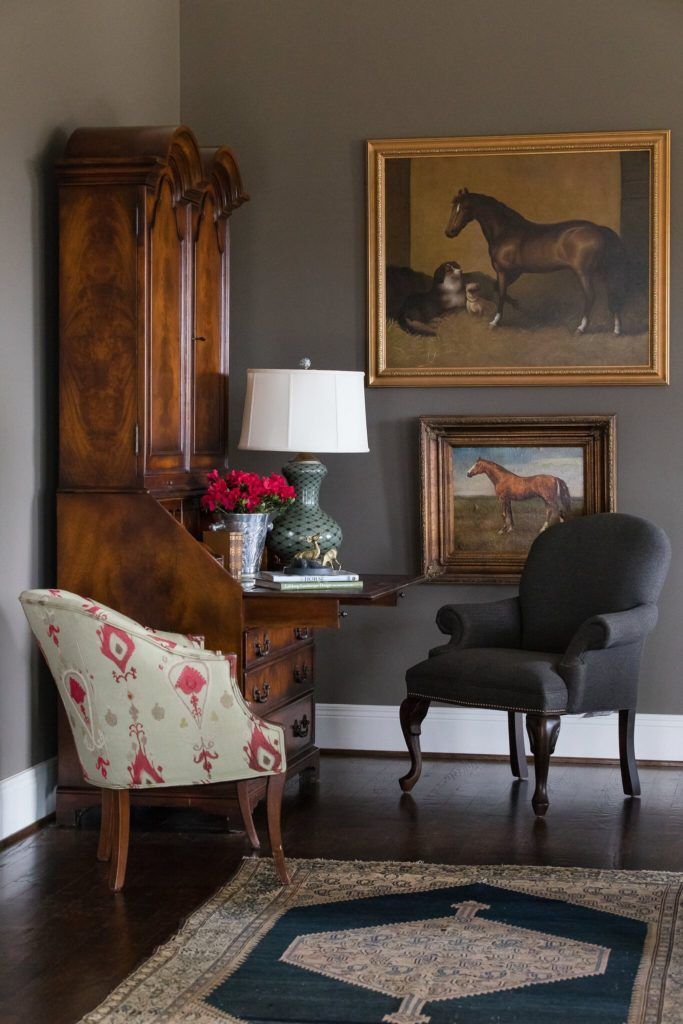 Indeed his rooms are elegant and classic, but they are also more than that. To me, an Eric Ross room is rich and textured and inviting. They are a smart and thoughtful blend of old and new, masculine and feminine. He does grand very well (heightening entryways and including glamorous touches). He also does casual quite well (an unbuttoned chic). And what I especially admire is how Ross takes risks (interior doors painted British racing green) and ups the ante (large scale patterns and bright colors) when appropriate . His rooms don’t scream, they entice and enchant.

Here are just a few of the things that I learned about creating an enduring Southern style: 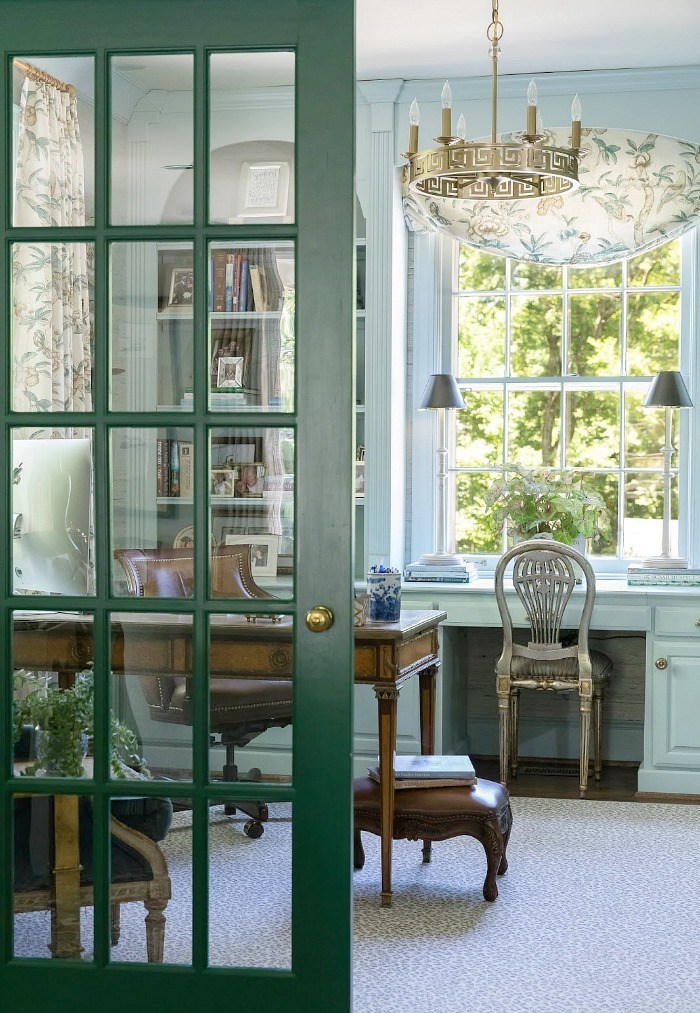 Enduring Southern Homes is an elaboration on these and other elements of design, and Mr. Ross is selling signed copies on his website (a great idea for a Mother’s Day gift). And while you are there, be sure to take a look at his blog, which is full of his lively opinions on things like trends and colors and so on.

Another was Mrs. Burden, who had a big house on Long Island, where she had installed the old gates from Devonshire House that she bought when they tore it down. ~ Nancy Lancaster

Architectural elements—salvaged architectural pieces like old doors, windows, corbels, pediments, mantelpieces, columns, balusters, garden gates, fences, finials, and so on—used unconventionally in rooms is a popular thing right now. And using these historical building pieces as a statement or as understated accents is a smart way to give character to a newer space or to add even more depth and texture to an older one. It’s a way of repurposing that I think is a good one for many reasons, but mostly for how it gives beauty a second chance.

But the trick nowadays is to avoid the cliché (isn’t that always the trick?!), like barn doors used as a dining room table (once this was fresh, now it is feeling a bit passé). 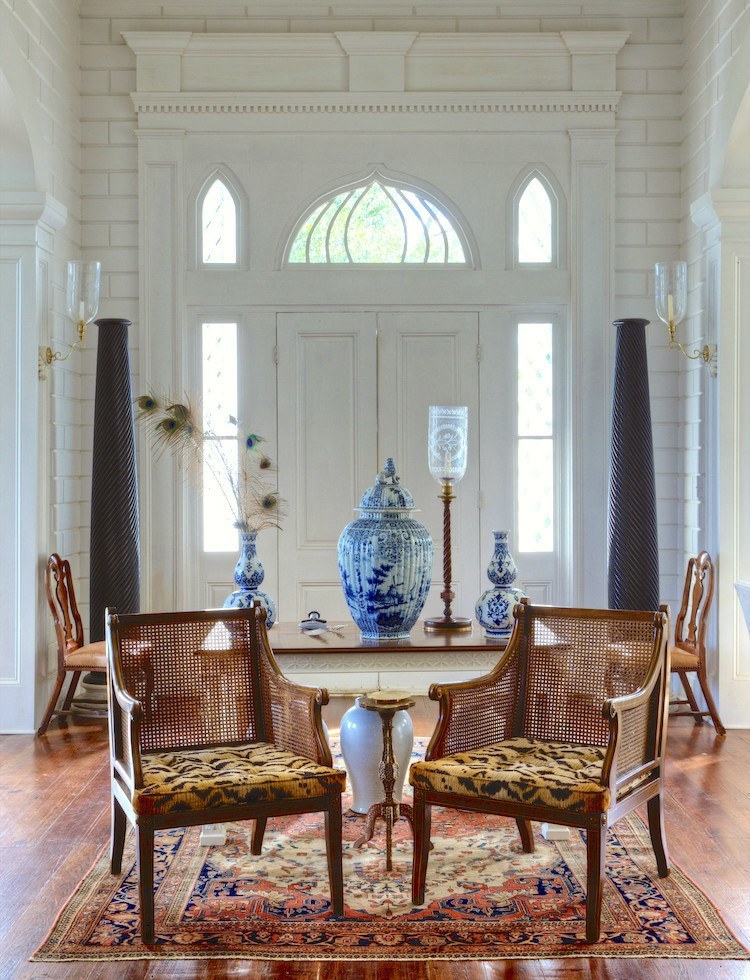 Antique dealer, Furlow Gatewood, surprises with gothic elements artfully placed in an otherwise traditional setting. It works so well because he sticks with shades of white and gray so that what we notice most of all are the lines and the interesting juxtapositions that begin to appear as our eyes move around the room.

Darryl Carter has a knack for creating works of art out of salvaged pieces and giving them center stage in his chic, minimalist rooms. What I like about his out-of-context, slightly exaggerated use is how it makes us see something with fresh eyes and opens up possibilities, and of course good conversation.

And one can imagine the life these rustic barn doors had before being re-imagined as indoor shutters painted a gorgeous turquoise by designer Barbara Westbrook. 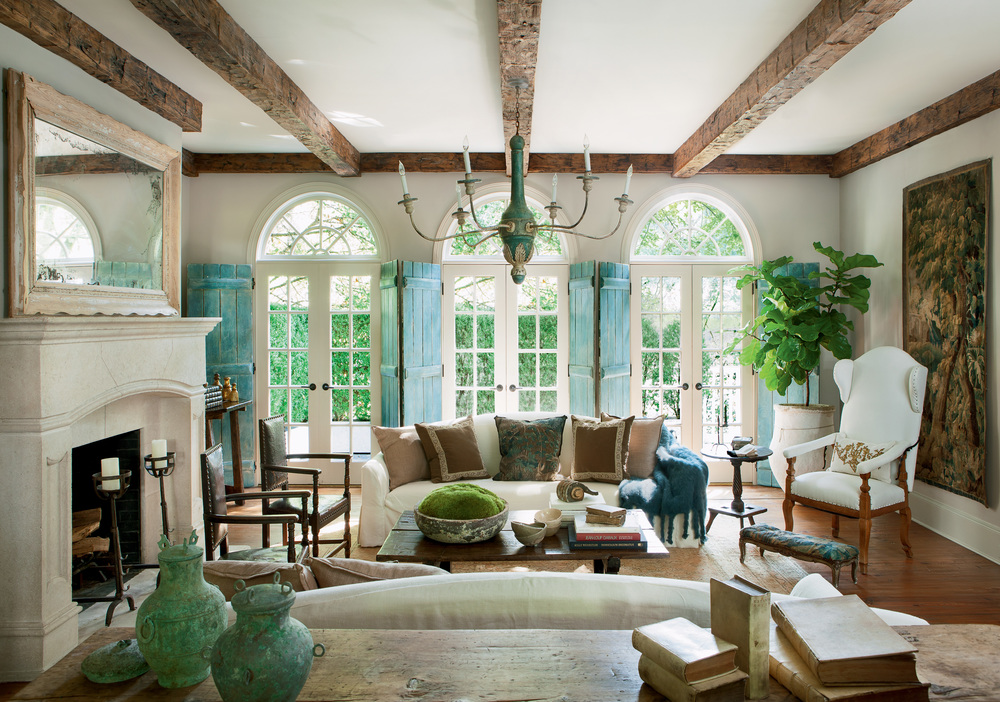 One more option, a slight twist on this theme, but one that must not be overlooked is incorporating nicely framed architectural drawings.

For those of us creating rooms that we want to live in comfortably, adding architectural details can be elegant and chic if we keep this in mind: let them find you. When we go looking for these elements for a certain spot they feel forced. When we find them in our travels—near or far—they seem to belong wherever we put them.

(Note: This post is the first in a new series for 2019 titled “Elegant Country Style: The Country House Milieu from A to Z.” Hope you will enjoy following along!)