It all started with a small table that I wanted to have painted green. What I like about green as an accent is how it works very differently than say red or orange as an accent. Think of how green functions in nature, and how we use it in floral arrangements: it can soften or compliment or contrast other colors but it rarely steals the show completely. There are many shades of green and there is no proper green for accent, but if you like the idea of trying it, here are five shades that have gotten my attention.

For my small side table, I was thinking of a classic and bold green, a Kelly green, something like the green that Furlow Gatewood uses on the coffee table pictured above because I like how it brightens the room but still seems unobtrusive. His look here is flat and weathered and it works, but I also like the idea of using a glossy finish with this color green for a different effect, one of sophistication and polish.

Edward Bulmer’s Invisible Green, which is described as “hardly invisible but…taken from the 19th century idea of painting ironwork in the landscape to vanish it and we mixed a beautiful grass green” seems to be a green to try for this classic, clean green. (And you might notice, I am partial to colors with a historical reference: they bring another layer of richness to a room and I love a good backstory).

I was also inspired by the green on the chairs in Virginia Woolf’s Monk’s House. They are a slightly moodier green with a touch of blue, and blend in nicely with the eclectic style of her cottage and remind us of the garden just beyond the windows. Two colors to try for this look are Essex Green by Fine Paints of Europe in the Dorothy Draper and Carleton Varney Collection and Spotswood Teal by Benjamin Moore in their Williamsburg Collection. 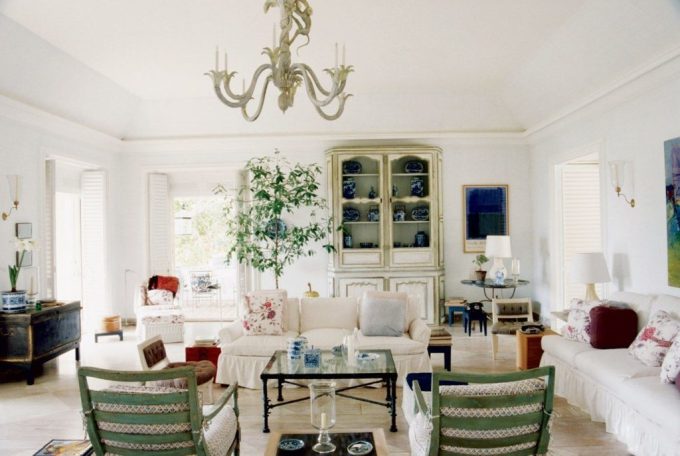 Another set of chairs, this pair of chairs in Bunny Mellon’s living room, are painted in a softer green that leans toward gray, something like sage. In this understated, mostly white room, our eye is drawn to the chairs without even noticing, without being jolted out of the mood of the room.

A similar look is seen above with sage green French chairs flanking a dresser in a hallway. They add just a touch of drama, compliment the mostly white hallway, and give it some warmth that is often hard to achieve in passageways.

Benjamin Moore’s Bassett Hall Green in the Williamsburg Collection is a nice color to try for this look. 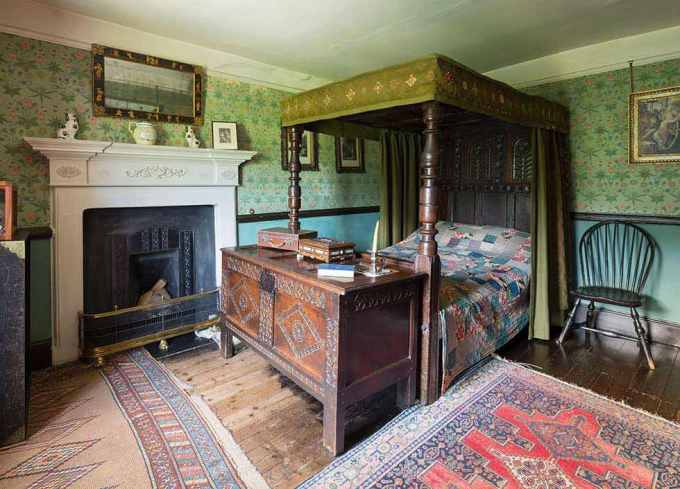 What Beatrix Potter did in her bedroom on her farm in the English countryside is also an interesting way to use green as an accent. She chose a color to compliment her William Morris wallpaper and covered the top with that and bottom with a dark bluish green. Little Greene Paints out of England has created a shade to match Potter’s green called Ambleside Green and using it as she did is a very fine idea—even now.

Most greens are calming, I think, rather like walking through a forest. Or looking out over green pastures. And just a touch in a room gives us this feeling too.